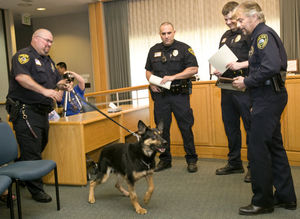 On March 1, Keegan tracked a suspect in a multiple stabbing, following a blood trail over two fences to a garage. The blood trail went past the building, but Keegan turned around right away, said his partner, Officer Craig Sammon. Keegan was sent in and dragged the suspect out from where he was hiding beneath some rubble.

For his work on the case, Keegan, a 6-year-old German shepherd, became the first K9 to receive a Rochester Police Department commendation. The award was presented during a department ceremony on Wednesday.

Sammon also received an award for his role in the stabbing case.

Keegan and Sammon have been partners since 2007, when they both went through a 12-week training at an academy in St. Paul to learning general police skills, like human tracking.

“Just to be able to watch him work and be part of it is phenomenal,” Sammon said.

Peterson also handed awards to two citizens, 13 officers and a sergeant during Wednesday’s ceremony. Many of the recipients, like Keegan and Sammon, worked together on the same case.

Brede welcomed everyone at the ceremony with a “sincere thanks” to the award recipients.